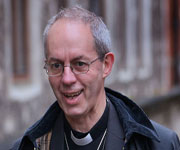 The next Archbishop of Canterbury, Right Reverend Justin Welby has urged the parliamentary body of the Church of England to support legislation allowing women bishops. General Synod members have spent the morning debating draft legislation ahead of a crucial vote later today. Addressing Synod, Justin Welby said women priests - first permitted 20 years ago - had contributed enormously to the Church and that their ministry had shown itself to be powerful.


"It is time to finish the job and vote for this Measure," Justin Welby said. "But also the Church of England needs to show how to develop the mission of the Church in a way that demonstrates that we can manage diversity of view without division." He said the Church was called to demonstrate reconciliation to the world as a lived reality. "As we talk, at this very moment, in places from Israel and Gaza to Goma in the Democratic Republic of Congo, there is killing and suffering because difference cannot be dealt with," he said.


"We Christians are those who carry peace and grace as a treasure for the world. We must be those who live a better way." Feelings are strong on both sides of the debate, with traditionalists saying that the provision for alternative oversight does not go far enough in meeting their needs. Supporters are impatient to conclude a debate that has dragged on for over a decade. They point out that women bishops have majority support not only in the Church but in wider society. In the morning's debate, Bishop Welby sought to allay the fears of some traditionalists that promises of accommodation will not be respected once legislation is passed.


"I am personally deeply committed, and believe that fellow bishops are also, to ensuring as far as I am able that what we promise today and later in the Code of Practice is carried out faithfully in spirit as well as in letter," he said. "Expressing in attitude and by our actions that we more than respect but also love one another is a foundation stone for our mission in this country and the world more widely. "We cannot get trapped into believing this is a zero sum decision where one person's gain must be another person's loss. That is not a theology of grace."