Among Struggle Palestinian Christians look ahead to Christmas 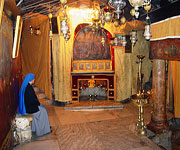 Armed conflicts and a decline in tourists and pilgrims from overseas will cause difficulties for Palestinian Christians, but they will still celebrate Christmas. "There are good and bad feelings this Christmas but if we consider that Christmas is above all a spiritual feast, I believe it will be a very good celebration," Auxiliary Bishop William Shomali of Jerusalem told Aid to the Church in Need Dec. 17. "There will certainly be fewer pilgrims and other visitors from overseas. Many have canceled their trips here but we will still have many people coming from Galilee and elsewhere as well as many Christians from Bethlehem."


Christians have been cheered by the ceasefire between Israel and Gaza's ruling Hamas party, which put a halt to renewed violence after rocket attacks from Gaza militants prompted retaliation from the Israeli military. Bishop Shomali said that local Christians also appreciate the United Nations' recognition of Palestine as a non-member state. "For Christians in and around Bethlehem, Christmas this year will be joyful because of the U.N. recognition of the Palestinian state," he said. "This has given people a lot of morale and indeed is seen by many as a victory." However, continuing violence in neighboring Syria, where tens of thousands of people have been killed in the conflict between rebel forces and the Syrian government, continues to cause concern.


"What is happening in Syria casts a dark shadow. It impacts on us very greatly. We are not happy with what is happening in Syria. We are anxious and sad about the situation there," the bishop said. Aid to the Church in Need is supporting several charitable projects including the Bethlehem Seminary and Solidarity Village, a low-cost housing project for young Christians in East Jerusalem. The charity also supports families who make crosses, cribs and other olive wood religious items that the international Catholic pastoral charity sells.


Israeli security concerns have caused major problems for Bethlehem Christians. Travel restrictions mean few can leave their West Bank city to work and tourists have difficulty entering. Neville Kyrke-Smith, Aid to the Church in Need's U.K. director, launched a prayer appeal for peace between Israel and Palestine on Nov. 25. "The Christian community must not stand back hoping that conflicts like this will burn themselves out. We have to act now for the people," he said. "Our Lord prayed for the peace of Jerusalem. We must pray too for the peace of Jerusalem and the wider Middle East." Patriarch Fouad Twal of Jerusalem has thanked Aid to the Church in Need for its prayer campaign.