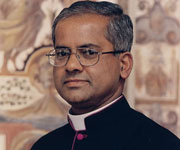 The Papal envoy to Ivory Coast, Indian Archbishop Ambrose Madtha has been killed in a traffic accident in the west of the country, the Ivorian church announced. Madtha was travelling back from the Northwestern town of Odienne to an ordination ceremony in the country's West on Saturday evening when his car collided with another vehicle. "Unfortunately the apostolic nuncio died on the spot," said Mathieu Tehan, spokesman for the Western diocese of Man where the ceremony was to take place.


President Alassane Ouattara, in a statement read on national television, expressed his "deep regret" at the death and sent condolences to the church and Madtha's family. He was born on November 02, 1955 at Belthangady in Dakshina Kannada district of Karnataka state in India. He was ordained on March 28, 1982 at Lucknow, India and became the doyen of the Ivorian diplomatic corps after arriving in 2008.


Madtha, who assumed his post in 2008, had officiated a service in the Northwestern town of Odienne on Saturday and was traveling to the western town of Man when his vehicle collided with another vehicle. He tried to play a behind-the-scenes mediating role during Ivory Coast's 2010-11 political crises when the previous ruler, Laurent Gbagbo, refused to step down even though Ouattara was declared winner of presidential elections.


The Catholic Church was put in a delicate position since some of the country's bishops favoured Gbagbo, who comes from the country's majority Christian south. Ouattara is from the largely Muslim north. During the last month, President Alassane Ouattara accompanied by his Christian wife met Pope Benedict XVI in Rome. Ivory Coast and the Vatican agreed on "the role that the Catholic Church can offer for the good of the country, by encouraging and promoting human rights, dialogue and national reconciliation", the Vatican said in a statement at the time.


Gbagbo is now awaiting trial for crimes against humanity at the International Criminal Court in The Hague. Around 40 per cent of Ivory Coast's population is Muslim and 40 per cent Christian. Some 20 per cent are believers in native religions.