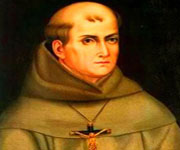 The Church in California is celebrating the 300th anniversary of the birth of Blessed Junipero Serra. He was born at Majorca in Spain but came to the United States state where he founded a chain of missions. The Diocese of Monterey recently kicked off celebrations with a Gala evening attended by U.S. Secretary of Defense Leon Panetta. His life and legacy in this Year of Faith, the Bishop of Monterey, Richard Garcia says it is wonderful to be celebrating both events.


Father Serra died at the aged of 70 at the St Charles Borromeo Mission in Carmel, Monterey in 1784, where he is now buried under the sanctuary floor. He was Beatified by Blessed Pope John II on September 05, 1988.