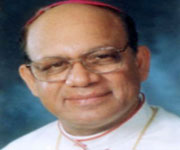 Senior delegates at the 10th Plenary Assembly of the Federation of Asian Bishops' Conferences (FABC) have made positive remarks about the spiritual life in Vietnam. The comments were made at a meeting between the Vietnamese Government Committee for Religious Affairs and FABC representatives that included Cardinal Gaudencio Rosales, Special Envoy of Pope Benedict XVI and Cardinal Oswald Cracias, FABC Secretary General, in Hanoi on December 10.


Arriving in Vietnam, the delegation was touched by the friendship and openness of Vietnamese people, the two cardinals said. Pope Benedict XVI knows of the Vietnamese Catholic community's positive developments, said Rosales and Gracias. The Pope highly appreciates the growing ties between Vietnam and the Vatican, as well as the support the Vietnamese Government offered Vatican's non-permanent representative to the country, they added.


Addressing the meeting, Head of the Government Committee for Religious Affairs Pham Dung, who is also Deputy Minister of Internal Affairs said his committee is assigned the task of guiding and helping religions in Vietnam to operate in line with the country's law and charters. The committee is also a bridge between the State and parishioners, he added.


Catholicism, the second largest religion in Vietnam, has made many contributions to the construction and development of the country, the official said. He hoped the delegation would learn more about the daily life and religious activities of Vietnamese parishioners and offer suggestions to improve his committee's management of religious affairs.


Dung also asked the delegation to convey his thanks to the Pope and related ministries of Vatican, wishing they would pay more attention to the Catholic community in Vietnam. The 10th Plenary Assembly of FABC is taking place in the southern province of Dong Nai and Ho Chi Minh City from December 10-16. The meeting, held in Vietnam for the first time, attracted the participation of 122 participants including cardinals, archbishops, bishops and church representatives from Asia, Europe, Australia and the Vatican.