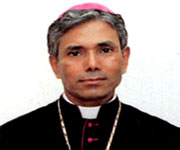 Fifteen days ahead of Christmas, "Khristayan", a six hours long film on Jesus Christ was released at Bhopal in Madhya Pradesh on Sunday. The film has been directed by Fr Geo George from Indore. The film is likely to be telecast in parts as a TV serial in the coming days. Talking about the film, Fr Johnney P J said, "The specialty of this film is that it is shot in Hindi in the Indian context taking into consideration the cultural aspects of our country. All the previous films on Christ have been from the western point of view. It is a mega project also an inter-provincial venture."


"Today was just a sneak peek into the film. Later it may be aired as a sponsored TV serial like the Ramayana," Fr Johnney said. While actors are from Madhya Pradesh and Mumbai, professional singers from Mumbai have sung songs in Hindi. Around 200 actors have acted in the film. The film was released at the Miriam school for the Mentally Handicapped. The chief guest of the programme was Archbishop Leo Cornelio of the Bhopal diocese.


At the end of the programme the Archbishop said that such films which inspire and are socially relevant should continue to be made. "The film is not for the Christian community but for all sections," he said. Besides, Fr Nicholas Martis and other priests were also present.