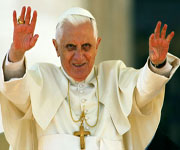 Italy and the entire world, where people complain of unfair taxes, of a pitiless power, of an unjust economic crisis, can find inspiration in the words of John the Baptist. This is what Pope Benedict XVI affirmed in his reflection before the Angelus with the faithful and pilgrims gathered in St. Peter's Square, adorned for the past two days by a giant Christmas tree. The pontiff revealed some interesting couples such as justice and charity, taxes and honesty power and respect which are needed in our contemporary society, concluding that "the signs of the Baptist are always relevant in our complex world, things would be much better if each of us observed these rules of conduct."


Recalling the Gospel of today's Mass, which presents the figure of John the Baptist, the Pope commented on the words of the Baptist when asked "What should we do?" while waiting for the Messiah.


The first response - said the pope - is addressed to the crowds in general. The Baptist says: "Whoever has two cloaks should share with the person who has none. And whoever has food should do likewise ". Here we can see a criterion of justice, enlivened by charity. Justice asks us to overcome the imbalance between those who have the superfluous and those who lack basic necessities; charity urges us to be careful of one another, to reach out to others and meet their needs, instead of finding excuses to defend our own interests. Justice and charity are not opposed, but both are necessary and complement each other. "Love will always be necessary, even in the most just society," because "there will always be situations of material need where help is indispensable in the form of concrete love of neighbor".


The second answer - said the Pope that John makes to some" tax collectors" on behalf of the Romans. Tax collectors were despised, also because they often took advantage of their position to steal. The Baptist advises them not to change jobs, but neither to exact more than what has been set. The prophet, in God's name, does not seek exceptional gestures, but above all the honest fulfillment of one's duty. A first step toward eternal life is always keeping the commandments"


"The third response - he concluded - regards soldiers, another category with a certain power, and therefore tempted to abuse it. John says to the soldiers:" Do not oppress and extort anything from anyone; be content with your wages". Again, conversion begins with honesty and respect for others, an indication that applies to everyone, especially those with greater responsibility."


After the Marian prayer, Pope Benedict XVI appealed for the families of the capital to give hospitality to young people who will arrive in Rome from 28 December to 2 January for the European meeting organized by the Taizé Community. "I thank the families - said the Pope- who, according to Roman tradition of hospitality, have made themselves available to accommodate these young people. Because, thanks to God, the demands are higher than expected, I renew the appeal already addressed to parishes, so that other families, with great simplicity, can enjoy this beautiful experience of Christian fellowship".


Finally, during his greetings in Italian, the Pope welcomed the children of Rome, in St Peter's Square for the traditional blessing of the statues of Baby Jesus, which will be placed in the manger on Christmas Eve, "Beloved children, - he said - as I bless the little statues of Jesus that you will put in your nativity scene, I cordially bless each of you and your families, as well as educators and the Roman Oratory Centers".