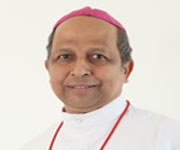 Bishop Anil Joseph Thomas Couto of Jalandhar has been named the new archbishop of Delhi replacing Archbishop Vincent Concessao, who passed the canonical retirement age of 75 last year. Fr Mathew Koyickal, chancellor of the archdiocese, read the letter of appointment from Pope Benedict XVI at the archbishop's house in New Delhi. Around 100 people were present at the event. Bishop Couto could not take part in the program as he was out of the country.


Archbishop Concessao served the Delhi archdiocese for 12 years since Sept. 7, 2000. The archbishop, born in Mangalore, celebrated his 75th birthday on Sept. 28, 2011. Church law demands all prelates to submit their resignation on completion of 75 years of age. The Vatican will decide whether these resignations will be accepted.


Bishop Couto, 58, was born in Goa and was ordained a priest for Delhi archdiocese on Feb 8, 1981. He became Auxiliary Bishop of Delhi in 2001 and continued in that capacity until transferred to Jalandhar as its bishop in 2007. The Delhi archdiocese, formed in 1959, has some 105,000 Catholics in 61 parishes.


The Archdiocese comprises the state of Delhi and the districts of Gurgaon, Rohtak, Mahendragarh, Sonepat, Faridabad, Nuh, Jhajjar and Rewari of Haryana. Jullundur is a suffragan diocese of the archdiocese along with Jammu-Srinagar and Simla and Chandigarh dioceses.