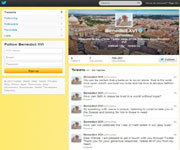 Pope Benedict on Wednesday inaugurated his new Twitter account and has begun tweeting responses to questions that have been sent to him from countries around the world. The Pope sent his first message from an Ipad at the end of his general audience in the Paul VI hall, watched and photographed by a huge crowd of pilgrims and visitors. His first tweet read "Dear friends, I am pleased to get in touch with you through Twitter. Thank you for your generous response. I bless all of you from my heart."


A little later he sent the first response to a question asking, "How can I live better the Year of Faith in my daily life?" Pope Benedict replied "Dialogue with Jesus in prayer, listen to Jesus who speaks to you through the Gospel, meet Jesus present in those in need."


During the afternoon, as responses were tweeted to two more questions of faith, the Pontifical Council for Social Communications announced that the papal feed @pontifex now has over a million followers, well exceeding expectations as Council President Archbishop Claudio Celli told.