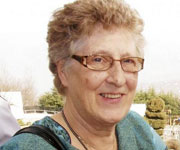 The 71-year-old aid worker, Birgitta Almeby, who was shot in the chest in Lahore by a gunman while doing Christian work in Pakistan has died at the Karolinska Hospital in Stockholm late on Wednesday, Swedish media reported. She was receiving treatment after having been flown to Sweden for specialist medical care for her injuries. Speaking with the media, a representative from the Pentecostal church in Koping said Almeby's injuries had resulted in serious brain damage, leaving little hope that she would ever fully recover.


"She was returning from her office and was attacked when she arrived in front of her home in the Model Town neighbourhood," Awais Malik, a senior police official told. She was working in Lahore for the US-founded Full Gospel Assemblies, which describes itself as a "church fellowship" with congregations all over the world. Malik said on Monday that the culprits had not yet been identified.


Almeby, who led the Full Gospel Assembly charity, coordinated a church boarding school for orphaned girls in Lahore and other aid projects in Pakistan for nearly 40 years. The motive behind the shooting remains unclear, but local Christians said she had received threats from unknown men who they linked to Islamic militants. There were no known detention of one or more suspects Thursday, December 13.


Officials of Pakistan's Christian minority suggested that the killing of Almeby underscored a growing number of attacks by militants against Christians and moderate Muslims. She was the second Western aid worker targeted in Lahore in recent years. Warren Weinstein, a 71-year-old American, was kidnapped in the city in August 2011 and is still missing.


The president of the Pakistan Christian Congress party, Nazir Bhatti, said Pakistan's Punjab province, where the missionary was killed, is "a hotbed of Islamist extremism and a hub of banned terrorist organizations" backed by at least some leaders of the Punjab Government.