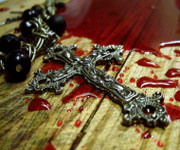 Release International has warned that Christians face a growing risk of persecution this year in parts of the Islamic world. Areas of special concern are Egypt, Pakistan, Northern and Central Nigeria. It estimates that around 100,000 Christians have left Egypt since 2011. Coptic Christians boycotted the recent referendum on the constitution because they felt it represented only the Islamists who drafted it. They fear that the constitution will further restrict the rights of religious minorities.


There are particular concerns for Christian converts from a Muslim background, who have in the past been detained and tortured by security forces. "Persecution of Christians in Egypt is increasing, along with Islamisation. Fundamentalists are taking advantage of Muslim-Christian conflicts," said a Release partner in Egypt. Release Chief executive Paul Robinson said: "Please pray for Christians in Egypt at this time of change and pray for unity and a growing boldness in their witness." In Pakistan, a local partner there says persecution is increasing "by leaps and bounds".


In Nigeria, militant Islamist group Boko Haram has carried out a series of deadly attacks on churches and Christian buildings. Boko Haram has declared its intention to rid northern Nigeria of Christians and implement strict Sharia law.


There have also been reports of increased persecution against Christians in North Korea. Release says North Korea is one of the worst places in the world to be a Christian. The country's new leader Kim Jong-Un is said to regard the underground church as a possible source of resistance to his untested leadership. "So he has sought to repress Christians even more severely than his father, Kim Jong-il," reports Release partner Helping Hands Korea. Another Release partner says North Koreans who are working as missionaries in China are being kidnapped by undercover security agents working for North Korea. "They are taken back, tortured and killed," the partner said.


Another source of concern is Eritrea where the government has banned many Christian denominations and detained at least 1,500 Christians without trial. It reports that many have been tortured and some have died in custody. Release said it believed Eritrea was pursuing a "systematic policy to eradicate evangelical and Pentecostal Christianity". In India, anti-conversion laws are being used against Christians and there are reports from the All India Christian council that Hindu activists are targeting house churches as membership continues to grow.


In 2013 many Christians around the world will face increased persecution. They ask those of us who enjoy freedom of faith to stand with them in prayer and offer our practical support. "I appeal to Christians throughout the UK not to forget these, our brothers and sisters on the frontlines of faith. Please do all you can to help us to help them"