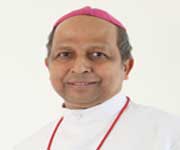 The newly installed Archbishop Anil Jose Thomas Couto of Delhi has urged leaders from various religions to join hands to build a better world at a meeting which was organized jointly by the Catholic Bishops' Conference of India's Office for Dialogue and Desk for Ecumenism and the Regional Bishops' Council of North for Dialogue and Desk for Ecumenism yesterday in New Delhi. During his speech, said that the world in which we live is often marked by conflicts, violence against women, exploitation of children and corruption. We have to work together to bring peace and harmony. He was speaking at a program organized to felicitate him.


Archbishop Anil Jose Thomas Couto said that dialogue alone does not help but we should act upon the values of our religions. He also added that the Religion has to be translated in to action. Inter-religious dialogue would be effective only if we deal with problems. Representatives from various religions like Buddhism, Hinduism, Jainism, Judaism and Islam attended the program.


Swamy Chakrapani, National President of the Akhil Bharatiya Hindu Maha Sabha, said, "we are all children of god and should work together to actualize love and peace. Jesus came to the world with a message of love and peace." Maulana Wahiduddin Khan from the Muslim community said that all religions preach compassion, peace, harmony, respect and tolerance and "we are called to bring peace and harmony."


He said that Jesus' teaching on love your enemy has attracted him very much and he always preaches it. Bishop Ignatius Mascarenhas of Shimla-Chandigarh said the appointment of Archbishop Couto comes at a crucial time in Delhi. Bishop Mascarenhas, who is also the Vice-Chairman of Regional Bishops' Council of the North pointed out that the national capital is going to see a very challenging moment in 2014 when the general election comes. "The archbishop is on a hot seat and his voice is not only for the Delhi Archdiocese but would be approached on behalf of many other dioceses to speak on different issues," he added.


Archbishop Couto, 58, was born in Goa and was ordained a priest for Delhi archdiocese on Feb 8, 1981. He became Auxiliary Bishop of Delhi in 2001 and continued in that capacity until transferred to Jalandhar as its bishop in 2007. He succeeds Archbishop Vincent Michael Concessao, who retired on reaching the canonical retirement age of 75.