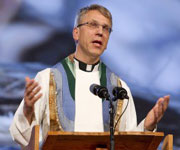 The 10th Assembly of World Council of Churches (WCC) will be an opportunity for praying, listening and sharing together. The event will provide participants a chance to listen for the voice of God, leading them to justice and peace in the world. These were the words of Rev.Dr Olav Fykse Tveit, the General Secretary of WCC, who spoke with the press in Seoul, Republic of Korea on 29 January.


Along with Dr Metropolitan Gennadios of Sassima, Vice-Moderator of the WCC Central Committee and Moderator of the Assembly Planning Committee, Rev.Dr Henriette Hutabarat Lebang, General Secretary of the Christian Conference of Asia and WCC staff members, Tveit is in Seoul finalizing plans for the WCC assembly. The WCC 10th Assembly will be held from 30 October to 8 November this year in the Korean port city of Busan.


At the press conference, Tveit introduced the WCC, its work and the theme of the assembly, "God of life, lead us to justice and peace". He explained that the WCC is a worldwide fellowship of churches bringing together more than 560 million Christians globally, in more than 110 countries. He said that among its diverse membership are Protestant, Orthodox, Evangelical, Pentecostal and Anglican churches, while the WCC also works in cooperation with the Roman Catholic Church.


"Through the WCC assembly, hosted by the Korean churches, we hope to respond to God's calling for Christian unity and common witness in the world," said Tveit. "The WCC assembly in Korea," Tveit said, "will make important statements on Christian unity, social issues, peace concerns for the Korean peninsula and global conflicts."


During his visit to Korea, Tveit will be meeting with several Korean church leaders. He is also scheduled to meet the Korean President Lee Myung-bak. On Sunday evening, 27 January, Tveit preached at the Myung Sung Presbyterian Church in Seoul, which is one of the largest Presbyterian congregations in Korea. The worship service was attended by more than 12,000 people. Source WCC