Persecution of Christians in Asia creates a shock 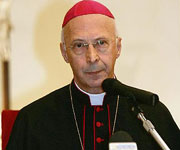 The persecution of Christians in Asia and around the world "creates dismay throughout the Church. In too many countries, Christians are not allowed any sign of religious affiliation, except by camouflage or in hiding. Experts speak a total of over one hundred thousand Christians of various denominations killed in 2012. A frightening figure, which cannot leave people indifferent - individuals and institutions - even less so in the name of economic and political interests", stated Cardinal Angelo Bagnasco, President of the Permanent Council of the Italian Bishops' Conference.


Besides the usual reminders about the Italian political, economic and social scene - reminders present in his book "narrow gate" (published by Cantagalli), presented on January 24 in Rome with the Vatican Secretary of State Cardinal Bertone - the Archbishop of Genoa devoted a long passage to the persecution of Christians in Asia: "The crisis which shock us most at the beginning of this year, which once again the Pope wanted to usher in, in the sign of peace, are situations of persecution which target Christians, situations which largely coincide with the unresolved conflicts in several countries, but partly also develop where apparently there should be no sources of tension".


In addition to the well-known places, says the archbishop, "racial nationalism is emerging in Asia that periodically arouses intolerant fury under the distracted eyes of the West that proclaims human rights but then seems to want to apply and demand these same rights with different measures. We regrettably also have to add the frontiers of Africa: Nigeria, Kenya, the Democratic Republic of Congo, Mali, where the reasons for the attacks are mixed and the public reasons for the violence seem to want to identify Christianity with the West. Yet the Gospel, wherever it is inculturated, is constantly accompanied by experiences of aid to people, often the only aid to be found on the spot".


Then, continued the Archbishop of Genoa, "there is ethnic migration of a religious factor, so people who profess Christianity - a religion that is perhaps the most historically rooted in a specific geographic area - must flee, leaving their entire existence and all their worldly possessions, in order not to renounce their faith. Behind the upheavals that took place recently in North Africa, disturbing attempts at further discrimination are emerging, and in too many countries Christians are not allowed any sign of religious affiliation, except by camouflage, in hiding, through dislocation".


Experts speak of a total "of over one hundred thousand Christians of various denominations killed in 2012. A frightening figure, which cannot leave anyone indifferent - individuals or institutions - even less so in the name of economic and political interests. Those who suffer and die for Christ do so for us, and they are our brothers regardless of the distance that divides us. In the mysterious economy through which the kingdom of God on earth is concretely woven, communion with these situations of martyrdom gives truth and vigor to our pastoral work, today focused on re-evangelizing the lands that have long known the Gospel".


In conclusion, Cardinal Bagnasco launches an invitation especially to the West: "If our parishes can keep alive, even nourish, a systematic memory of our brothers and sisters who are persecuted in the world, then even the local faith would be re- vitalised. Who else, if not they, can give us authentic momentum and reasons to believe? ". Source Asia News