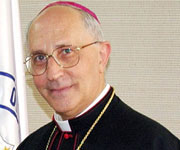 Cardinal Fernando Filoni, Prefect of the Congregation for Evangelisation of Peoples of the Vatican released 'Early Christians of 21st Century –Stories of Incredible Christian witness from Kandhamal Jungles' written by journalist Anto Akkara at the silver jubilee of the Conference of Catholic Bishops of India (CCBI) at the Marian Shrine of Vailankanni, Tamilnadu, India on February 10, 2013. The book contains the stories of Christian faith amid persecution during the 2008 anti-Christian riots in Kandhamal, Orissa.

"This book is prophetic and it will help our people grow in faith. It is fitting that Cardinal Filoni is releasing this book," said Cardinal Telesphore Placidus Toppo, the Archbishop of Ranchi.


Archbishop Salvatore Pennachio - Apostolic Nuncio to India, Cardinal Oswald Gracias, President of Catholic Bishops Conference of India (CBCI) and Bishop of Thanjavur Devadas Ambrose were present at the release of the book. Besides them, the program was attended by more than 120 bishops from across India. Cardinal Fernando Filoni underlined the importance of suffering and martyrdom in the life of Christ's faithful. Story of martyrs continues to inspire us. He thanked Anto Akkara for bringing out the stories of these witnesses.


The book is a collection over of 100 stories of amazing witness to the Christian faith amid brutal persecution of Christians in Kandhamal jungles of Orissa. Along with these spine-chilling testimonies, the book provides in-depth analysis of the lawlessness in Kandhamal. The 276-page book has been published by Veritas India Books based in Bangalore.


More than 100 Christians died for their faith in Kandhamal while 300 churches and 6,000 Christian houses were looted torched or destroyed rendering more than 56,000 people homeless in an orchestrated violence in Kandhamal. Akkara had earlier penned two books on Kandhamal violence- 'Kandhamal – a blot on Indian Secularism' and later 'Shining Faith in Kandhamal.'