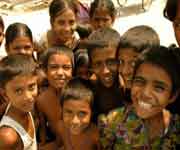 
A key trafficker, who was publicly identified as Binoy Tripura, allegedly confessed that he "collected the kids from their parents with lies and convinced them that [he] will admit all the kids to a Missionary [Christian] school in Dhaka." He then collected 15,000 taka ($183) from each of their parents and intended to receive payment from the madrassa upon delivery of the children.


"The children, Christians from the Tripura tribe, realized something was not right during their long bus journey from the remote Cimbuk Hill in the Bandarban district to Bangladesh's capital city, Dhaka," ICC said in a statement. "Twelve of the children ran away at a rest stop and called their parents to explain what was happening. Not knowing what else to do, the parents called Tripura tribal students attending Dhaka University, desperately asking for help. The university students met the bus in Dhaka, rescued the remaining six children, and captured Binoy, who is now in police custody," the rights group added. This is not the first time Christian children were trafficked to madrassas. Up to 150 children were freed from similar situations since July 2012, according to rights investigators.


ICC said Christian families are often targeted by Islamists due to their faith and vulnerability. This year alone, 55 children were reportedly rescued from madrassas in Dhaka. On January 2, police said it rescued 21 children from five madrassas and other Islamic organizations. The children were allegedly forcibly converted to Islam and had their Christian names legally changed to Muslim ones. They believe the children, once fully brainwashed at the madrassa, were destined for suicide squads for use in jihad, ICC said. Source BOSNEWSLIFE