Corruption makes violence against Christians and Minorities in Orissa 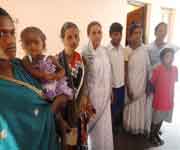 Corruption in the police force and local Government in Orissa favours violence against the poor as well as ethnic and religious minorities, this according to Sajan K George, President of the Global Council of Indian Christians (GCIC). He spoke as violence against Dalits, Tribals and minority groups, especially Christians, gets worse and the prospects for justice get dimmer. The latest episode occurred in Gajapathi when police on November 14 gunned down five people, four men and a woman, whom they mistook to be Maoist rebels. Since then, the victims' families have tried to obtain justice and compensation, to no avail.


The people killed were all farmers. Three of them-Aiba Padra, 35, Shyamason Majhi, 50, and Sanatan Mallick, 27-were adivasi, from the aboriginal Khondh tribe. The other two, Ghasiram Bagsingh, 33, and Laxmi Kanta Nayak (the only woman), were Pano Dalits. Aiba, Syamason and Ghasiram were also social activists working on behalf of their respective community. Although the victims were well known and no weapons were found at the site where they were killed, police said they opened fire when they came under attack.


A month later, on December 12, another anti-Christian episode was reported in Raikia (Kandhamal). Acting on behalf of the local mafia, local authorities tore down 12 houses, forcing the residents, poor families headed by widows, into the streets without compensation or alternate housing.


Meanwhile, seven innocent Christians are still in jail after four years. In calling for their release, Sajan George noted that they were not involved in the killing of Laxamananda Saraswati, a Hindu leader, whose death sparked Orissa's anti-Christian pogroms of 2008. Source Asia News