Evangelist Pradeep and his mother held for evangelising in Karnataka 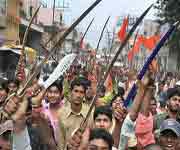 Evangelist Pradeep, (30) and Chowdamma, (60), are the latest victims of persecution of Christians in Karnataka by the fundamentalist Hindus who oppose their mission which include fearlessly demonstrating...faith in Christ's teachings said advocacy group Global Council of Indian Christians (GCIC). "We at GCIC were able to bail out our brother Pradeep and his mother", GCIC representative Regi Abraham told. "They were released February 11," after three days behind bars, he said. The exact amount of the bail was not immediately announced. Both Christians, who apparently only use one name, are part of the Karnataka Evangelical Ministry of Mysore, a mission group.


Witnesses said troubles began Friday, February 08, when both visited two Christian women, Jyothi and Lakshmi, to pray for them at their home in Bellahalli village in the state's Mandya District. While the evangelist and his mother began praying, some 20 members of Rashtriya Swayamsevak Sangh (RSS) or 'National Volunteer Organization' reportedly barged into the house and they allegedly intimidated and physically attacked both Pradeep and his mother Chowdamma, accusing them of forced conversion of Hindus to Christianity. Christians said both of them were injured in the attack, with Evangelist Pradeep sustaining injuries on his lips as well as a number of bruises on his face.


The Hindu radicals then forcibly took both the mother and the son by bus to the Pandavpura Police Station and handed them over to the police falsely alleging that the two were fraudulently and forcibly converting Hindus to Christianity by offering them money.The police who took them to the Pandavpura Government Hospital for treatment, subsequently also filed an FIR against them based on the false complaint and charge-sheeted them under section 295A of IPC and produced them before the local Magistrate who sent them to the Mandya Sub Jail.