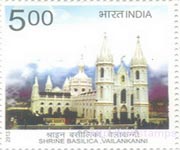 India Post released a stamp featuring Shrine Basilica of Vailankanni. Our Lady of Vailankanni also known as Our Lady of Good Health is a celebrated Roman Catholic title of the Blessed Virgin Mary believed to have appeared in the town of Velankanni, Tamil Nadu, India. Traditional beliefs surrounding the Marian apparition is held to have occurred to a young boy delivering milk goods to the neighborhood when the Virgin Mary, carrying a child Jesus, is said to have appeared and asked him for some milk.


A Shrine Basilica was erected by Portuguese and Indians presently standing in the site of the miraculous event. The iconic depiction of the Madonna is also unique since it is one of two only icons where Mary is portrayed wearing an Indian sari costume, while the other statue is said to have been buried with Emperor Aurangzeb. The Basilica is known for its pilgrims from all over India and its assembly of multilingual prayers every Christmas.


Many Indian Catholics have great devotion to the Blessed Virgin Mary under this title, dubbing the Marian apparition as "Lourdes of the Orient" due to the thousands of pilgrims who flock its sanctuary on the Feast of the Nativity of Mary. As part of the Indian tradition, believers customarily throw flower petals to the image, light incense, while others bring occasional goods and offerings to the church as a donation for one's personal petitions.