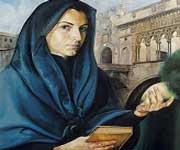 On May 07, the Church celebrates the recently-canonized Italian educator Saint Rosa Venerini, who founded Catholic schools for girls and young women during the late 17th and early 18th centuries. Her work is continued today by the “Venerini Sisters.” She was declared a Saint in 2006 by Pope Benedict XVI, who spoke in his canonization homily of her courageous work for “the spiritual elevation and authentic emancipation of the young women of her time.” He noted that St. Venerini “did not content herself with providing the girls an adequate education, but she was concerned with assuring their complete formation, with sound references to the Church's doctrinal teaching.”

Saint Rosa was born in the Central Italian city of Viterbo on February 09, 1656, she was the daughter of an accomplished doctor, Goffredo, who raised four children with his wife Marzia. At a young age, Rosa vowed to consecrate her life to God, though this resolution was tested during her adolescence. She briefly joined a Dominican women’s community during 1676, but returned home to comfort her mother after Goffredo’s unexpected death. One of Rosa’s brothers, Domenico, also died at age 27. Marzia was heartbroken and died within months.


In the wake of these family crises, Rosa invited local women to her home to pray the Rosary in a group. However, she was soon dismayed by the deficiencies she saw in their education and religious formation. This eye-opening experience shaped Rosa’s future, pointing her toward her ultimate vocation in the field of teaching.


In 1685, with the help of two friends and the approval of her local bishop, Rosa opened Italy’s first public school for girls. Rosa left Viterbo and founded ten schools in the Diocese of Montefiascone between 1692 and 1694. She also trained a local successor, the future Saint Lucia Filippini. Only after several years and one disappointing failed attempt, did Rosa manage to start a school in Rome, during 1713. Three years later, Pope Clement XI paid a visit accompanied by eight cardinals. Witnessing the work of Rosa Venerini’s teachers, the Pope personally thanked her, declaring: “With these schools you will sanctify Rome.”


The acceptance of Rosa’s work also increased her daily responsibilities. She undertook difficult journeys for the sake of her work, while maintaining a strong prayer life that kept her oriented toward God’s will in all of her undertakings. Spiritual direction from Jesuit priests helped her to combine an active apostolate with a life of contemplative prayer. She cultivated a close daily relationship to God while working to found over 40 schools. St. Rosa Venerini’s last illness came to an end during the evening of May 7, 1728. Her religious congregation, known in Italian as the “Maistre pie Venerini,” maintains an international presence.