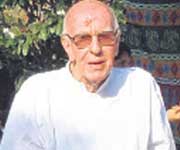 A British missionary Father Ian Weathrall, who was of Scottish origin, closely associated with India’s premier educational institution, St. Stephen’s College, died in Delhi after a long battle with cancer. He was 91 years when he died on Tuesday. He was the last British member of the Brotherhood, a religious congregation of the Church of North India (CNI). The funeral held on May 04, at the Cathedral of Redemption near the Rashtrapati Bhavan. He joined the Brotherhood of the Ascended Christ, an Anglican community of priests, in 1951 and lived in their Delhi house until his death.


As head of the Brotherhood, he was a member of the supreme council of St. Stephen’s College until death and a member of the governing body of St Stephen’s Hospital, a top healthcare institution in Old Delhi, where he died. He first came to know India during the Second World War as an officer in the 16th Punjab Regiment. After the war, the Scottish obtained a degree in theology from Kings College London and served as an assistant priest in Southampton for a short time.


He then returned to India, but retained his ties with Scotland returning there every year, says Mark Tully, a renowned British journalist based in New Delhi. According to Tully, who attends the services at the cathedral, the priest was renowned for his magnificent voice and the way he managed to pack so much into commendably brief sermons. “Although he set himself the highest standards, he was warm, gentle, and generous with anyone who went to him when in doubt or trouble,” the British journalist who has spent more than three decades in India.


The Brotherhood is now deeply involved in social work in East Delhi, providing education for deprived children, care for the elderly, and for leprosy patients too, among other services. Ian was the pioneer of this social service. He had served as the vicar of the historic St James Church in old Delhi where leprosy patients wait outside for alms.


The Brotherhood now has one bishop, three presbyters, one lay-brother and two lay probationers who belong to the Church of North India. The Delhi Brotherhood Society was set up in 1975 to organize social development project in the poorest parts of the Indian national capital. It has started programs of community health, education, vocational training and programs for street and working children.