Pakistan Minorities have no voting rights 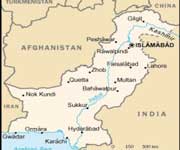 
Intolerance has been on the rise for the past five years under Pakistan's democratically elected Government because of the growing violence of Islamic radicals, who are then courted by political parties, say many in the country's communities of Shiite Muslims, Christians, Hindus and other minorities.


On Saturday, the country will elect a new parliament, marking the first time one elected Government is replaced by another in the history of Pakistan, which over its 66-year existence has repeatedly seen military rule. But minorities are not celebrating. Some of the fiercest Islamic extremists are candidates in the vote, and minorities say even the mainstream political parties pander to radicals to get votes, often campaigning side-by-side with well-known militants.


About 96 percent of Pakistan's population of 180 million is Muslim. Most are Sunni, but according to the CIA report about 10 to 15 percent are members of the Shiite sect. The remaining 4 percent are adherents to other religions such as Christians, Hindus and Ahmedis a sect reviled by mainstream Muslims as heretics because they believe a prophet came after Muhammad, defying a basic tenet of Islam that Muhammad was the last prophet. Sunni radicals view Shiite Muslims as apostates.


The U.S. Commission on International Religious Freedom in a report last month berated the Pakistani government for its poor record of protecting both its minorities and its majority Sunni Muslims and recommended that Pakistan be put on a list of worst offenders, which could jeopardize billions of dollars in U.S. assistance. "The government of Pakistan continues to engage in and tolerate systematic, ongoing and egregious violations of freedom of religion or belief," the report said. "Sectarian and religiously motivated violence is chronic, especially against Shiite Muslims, and the government has failed to protect members of religious minority communities, as well as the majority faith."


PCC President, Nazir Bhatti said the election is unconstitutional under Article 226 of the Islamic Republic of Pakistan's constitution; the Article directs that every seat in parliament to be filled by secret ballot, not by nomination. Bhatti said the votes of 20 million Pakistani Christians will only go to Muslim feudal lords, business tycoons and Islamists. “Religious minorities are pushed out of mainstream politics through these nominations," said Bhatti.