Vatican criticises persecution of Christians around the world 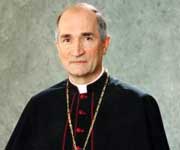 Archbishop Silvano Tomasi, the Vatican's permanent observer to U.S. agencies in Geneva told the Human Rights Council on May 27, 2013 that "credible research" by Massimo Introvigne, a former representative of the Organization for Security and Cooperation in Europe on combating intolerance and discrimination against Christians, "has reached the shocking conclusion that an estimate of more than 1,00,000 Christians are killed each year because of their faith and millions more face bigotry, intolerance and marginalization"


He also said, "in some Western countries, where historically the Christian presence has been an integral part of society, a trend emerges that tends to marginalize Christianity in public life, ignore historic and social contributions and even restrict the ability of faith communities to carry out social charitable services." But, in fact, Archbishop said, "The Christian religion, as other faith communities," serves the true good of humanity by educating members in their human dignity, their rights and responsibilities toward others and in serving their communities and the poor with schools, hospitals, homes for the aged, work in refugee camps and other acts of charity.


During a meeting in Tirana, Albania, May 21-22, the secretary of the Pontifical Council for Justice and Peace said, "examples of intolerance and discrimination against Christians have not diminished, but rather increased" in member-states of the Organization for Security and Cooperation in Europe, which includes 57 countries in Europe, Central Asia and North America.


Bishop Mario Toso, addressing the OSCE's high-level conference on tolerance and non-discrimination, said that across the 57 nations "a sharp dividing line has been drawn between religious belief and religious practice," in a way that tells Christians they can believe whatever they want and worship however they'd like inside the walls of their churches, "but they simply cannot act on those beliefs in public."


The bishop said there has been a "deliberate twisting and limiting of what religious freedom actually means," an interpretation which claims to promote tolerance for all people, but in fact tells Christians that they cannot wear symbols of their faith, publicly uphold traditional teachings on sexual morality and marriage and conscientiously object at work to procedures that violate the tenets of their faith.


"Intolerance in the name of 'tolerance' must be named for what it is and publically condemned," Bishop Toso said. "To deny religiously informed moral argument a place in the public square is intolerant and anti-democratic." Source Catholic Register