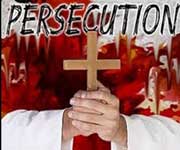 Hindu extremists brutally attacked 20 Protestant Pastors of the Telugu Baptist Church in the district of Mahehwaram Mandal in Hyderabad, the state capital of Andhra Pradesh in India. According to All India Christian Council (AICC), an ecumenical organization of Christian communities in India, on June 04, 2013 about 50 militants of the "Rashtriya Swayamsevak Sangh" (RSS) group interrupted a spiritual retreat of the Baptist Pastors at the Baptist Church, at Maheshwaram attacked and beaten them with sticks and rods and also abused them. During the violence, the militants accused the Pastors of forcing people to convert to Christianity


Among them, seven of the pastors were rushed to hospital as they had sustained injuries and filed a complaint to the police. A case has been registered with the police in this regard.


"Any type of violence must be condemned, but it must be said that incidents of this kind are not very frequent in Andhra Prdesh" said a Catholic priest of Hyderabad. The diocese of Hyderabad has launched "initiatives and programs for the Year of Faith: seminars, spiritual retreats and workshops for priests, religious and lay people who help the community to strengthen their faith."


“We are deeply concerned that anti-Christian attacks are taking place in the state. After Karnataka, such violence against Christians has started in Andhra Pradesh,” said John Dayal, AICC Secretary General. The AICC said that up to 1,000 local Christians are planning a peaceful rally to protest against the attack. According to a report "Global Council of Indian Christians", in 2012 there were officially 135 attacks against Christians in India.