WCC renews Commitment of Churches towards justice and peace 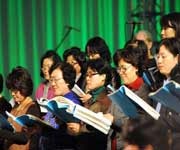 The 10th Assembly of World Council of Churches (WCC) in Busan, Republic of Korea, concluded on November 08th, acting to inspire churches to renew their commitments to justice and peace. Through varied encounters and dialogue within the fellowship of churches, the Assembly has made concrete decisions and recommendations setting priorities for the future work of the WCC. The Assembly reviewed programmatic activities of the WCC, issued public statements and recorded minutes of concern, endorsing engagement and action by the churches around the world. The Assembly also elected a new governing body to lead the WCC into its new mandate.
“This assembly, highest governing body of the WCC which meets every seven years, has provided a significant momentum for the ecumenical movement,” said the WCC General Secretary Rev. Dr Olav Fykse Tveit during a press meeting on November 07, 2013 in Busan
Rev Dr. Tveit said that the 10th Assembly has an important dimension, being held in the Republic of Korea; this has brought churches closer to the realities of an unresolved conflict. He said that through the WCC 10th Assembly, churches have been able to express solidarity with Korean people across South and North, strengthening the WCC’s efforts for peace and reunification on the Korean peninsula.
He stressed the importance of addressing the issues of migrants. “We see refugees trying to enter Europe for a variety of reasons – climate change as well as political reasons. This is a situation that must now be addressed at an international level,” he said. He confirmed that the WCC mandate presented at the assembly endorses that “we in Christian solidarity do not only support one another but reach out to anyone, who need our support and speaks out in front of the powers seeking peace and justice,”
"The WCC has an important role of being part of the wider ecumenical reflection on the definition and initiatives for mission and evangelism and we carry a legacy of important discussions about mission; but we also represent a richness of traditions and churches' practices of mission in their daily lives," he added. In his conclusion, he identified "just peace" as an important component in the strategic direction for the work of the WCC. He stressed the significance of defining future priorities, as well as reflecting on the "unique value" of WCC programs.
The WCC assembly, which gathered some 3,000 participants from around the world from 30 October 30 to November 08, addressed the theme “God of life, lead us to justice and peace”.

The Assembly reviewed the work of the WCC, using the report Faith That Does Justice: The Journey of the WCC from Porto Alegre to Busan. Areas of ecumenical engagement and concerns outlined include eco-justice, peace-building and advocacy, incorporating theological understandings and promoting ecumenical formation of youth.
It is in the context of the “pilgrimage of justice and peace” that we hope to further the WCC programmes inspiring the churches to work together, said Rev. Sharon Watkins, moderator of the WCC’s programme guidelines committee. While new directions in the financial strategy for the WCC’s work were developed, the WCC Assembly also received a financial report presented in Busan.
The Assembly took action by adopting statements and minutes on issues including peace and reunification of the Korean peninsula, politicization of religion and the rights of religious minorities, human rights of stateless people, and working towards just peace. The delegates expressed concern on Christian presence and witness in the Middle East, the situation in the Democratic Republic of Congo, among other issues raised at the assembly.
The Assembly has elected a 150 -person central committee which will serves as the decision-making body of the WCC until the next assembly in 7 to 8 years. The WCC Central Committee has elected Dr. Agnes Abuom from the Anglican Church of Kenya as Moderator and Prof. Dr Gennadios of Sassima of the Ecumenical Patriarchate of Constantinople and Bishop Mary Ann Swenson of the United Methodist Church, USA as Vice-Moderators.
The 150-member committee made a history on Friday by electing Dr Agnes Abuom of Nairobi, from the Anglican Church of Kenya, as the Moderator of the highest WCC governing body. She was elected unanimously to the position, is the first woman and the first African in the position in the 65-year history of the WCC.