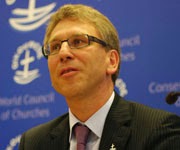 Rev. Dr Olav Fykse Tveit, the General Secretary of World Council of Churches (WCC) has congratulated new leaders of the South African Council of Churches (SACC), elected recently at its Triennial Conference in Johannesburg, South Africa from February 25 to 26, 2014. Bishop Ziphozihle Siwa was elected as the new president of SACC and Presiding Bishop of the Methodist Church of Southern Africa, who preached at former President Nelson Mandela’s funeral in Qunu.
During the meeting, a new National Executive Committee (NEC) was elected. Rev. Dr Frank Chikane was elected as Senior Vice President of SACC. He is an anti-apartheid activist known for his works among the local and international church community and he served as General Secretary of SACC from 1987 to 1994.
Fr Michael Lapsley was elected as Vice President of SACC. He is an Anglican priest with a vast experience of work in healing of memories in post-apartheid South Africa. He was severely injured by a letter bomb in the 1980’s when he was chaplain of the African National Congress in Harare.
Rev. Dr Olav Fykse Tveit said, “I convey my heartiest congratulations to the new leadership of the SACC as they begin their new ministry to serve churches and communities in South Africa”. “May the extraordinary South African ecumenical legacy of being a prophetic witness for justice and peace inspire the SACC in developing new visions for their pilgrimage of justice and peace in the years ahead,” he added.
Tveit affirmed the WCC’s support to the South African church leadership, looking forward to “continued collaborations” while the new officers undertake their work with the SACC.
Bishop Ziphozihle Siwa said, “It is a great honour to be given this opportunity to serve the church and nation at this level.” “I am fully aware of the challenges that the ecumenical movement faces at this time, but the church is called upon to remain faithful to her calling of being a sign of God's presence in the world, offering pastoral care and prophetic witness,” he said.